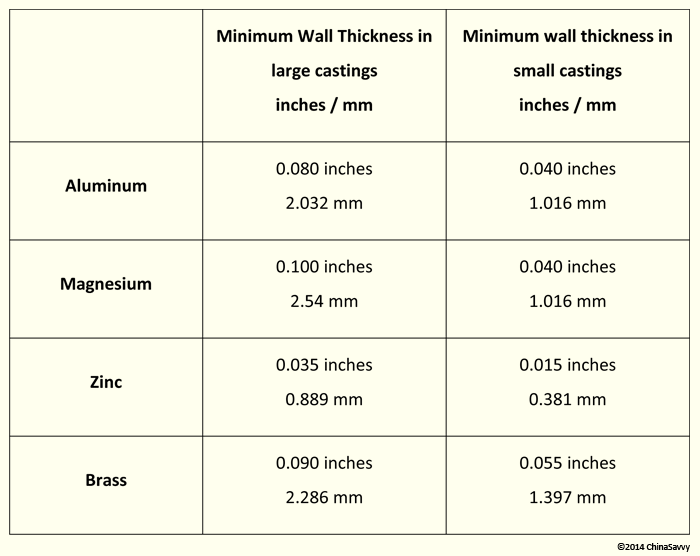 Die casting enables the casting of thinner walls when compared to other casting processes such as permanent mold casting and sand casting. A greater wall thickness will need a longer cooling time and is thus also a factor that must be taken into account.

Because the material (or alloy) cost is estimated by the weight of the material that is needed and the unit price of that material, casting thinner walls are affectively able to reduce material cost. Die casting parts with thinner walls also means a reduction in injection time as well as cooling time, helping to create a faster production line and, in turn, cut production costs.

Designers are also able to add Ribs to thin walls, which will help to increase the strength of the component.

Zinc alloys has a wide range of beneficial casting properties, in turn meaning that thin-walled cross sections are possible when casting this alloy. Usually cast with a wall thickness of one millimeter, thinner sections are also possible, but it depends on the flow of the alloy in that specific area.

Die cast parts made of zinc also offer a superior strength to weight ratio. Zinc casting can thus be designed using the minimum amount of material, affectively lower the cost of the production process as well as improving the production rate.

Zinc is also able to cast thinner walls that is possible with aluminum die casting.

A lightweight alloy, it offers manufacturers the ability to not only cast complex shapes with a high dimensional stability, but also a thin wall thickness. Compared to plastic injection moldings, aluminum castings have thinner walls, are stronger and are more light weight.

Where parts to be casted has external projections or undercuts, dies with sliding cores will be required. Though this might mean an increase in tooling costs, it will have other advantages such as a uniform casting wall thickness.

Because of the high fluidity of the AZ91D alloy, its predictable and consistent shrinkage rate, and its dimensional stability, it can be used for die casting parts that are small, have intricate and complex geometries, and have very thin wall sections.

Using the latest technology in hot chamber die casting, walls can be as thin as 0.040 inches and as small as 0.020 inches over short distances, all the while maintaining the integrity of the component.

ChinaSavvy's capabilities enables our team to not only reduce wall thicknesses, but also reduce the weight of the component by incorporating recesses and cross sections in the design stage.

As a ISO 9001:2008 registered die casting manufacturer, ChinaSavvy's specialized team is highly qualified in the field of die designs, casting and finishing. We know that the success of your project depends on various factors, including an efficient die design.

What alloy will be used, how it flows, what machines are used as well as the ejection system comes into play when designing the die.

Back to Main Page: Die Casting